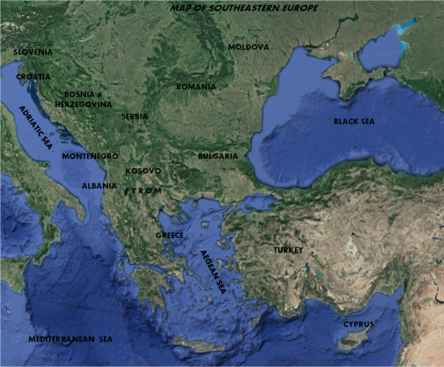 Nowadays it is said that Southeastern Europe has lost its strategic importance since the global Great Powers have lost their interest in the region. This point of view is though naive. Southeastern Europe has a very important role in the world’s geopolitical and geostrategic chessboard. First of all it is an integral sub-system of the wider security system of the East Mediterranean Sea. Secondly it is connected with the highly unstable security sub-systems of Middle East, North Africa and Caucasus. Apart from that, Southeastern Europe is an economic strategic and energy gate from Asia and Africa towards Europe. For example, one could mention the oil and natural gas pipelines crossing or planned to cross many countries of the region. The energy security of Europe is closely related to its Southeastern corner. Finally the countries of the region have an extended network of crucial infrastructures such as airports, ports, military, naval and air bases, heavy industries including nuclear plants which make them attractive for supporting extensive and long military operations. Finally, anyone who has the strategic control of the region can have access to Europe and Russia and easier control over North Africa and the Middle East.

Southeastern Europe is widely known as Europe’s “powder keg”. Not without reason, since “World War I” started in its territories and the latest war in European ground took place in the Balkan region and more specifically in the former Yugoslavia, interrupting a long period of peace, development and prosperity. The civil war changed forever the Balkan map since new states emerged.

There is much controversy over the borders of Southeastern Europe. It is generally accepted   that   it   includes  Romania  and  Moldova  to  the  north,  the  states  of  former Yugoslavia such as Serbia, Croatia, Bosnia & Herzegovina, Former Yugoslav Republic of Macedonia (F.Y.R.O.M), Slovenia and Kosovo (under the 1244 UNSC resolution), Albania to the West, Bulgaria and Greece to the South, Turkey to the Southeast and the island of Cyprus in the Eastern Mediterranean Sea. The first to use the term “Southeast Europe” was the Austrian researcher Johann George Van Hahn (1811 – 1869), who tried to describe the “Balkans” but in a broader way; 200 years later the term is fully adopted to describe the region, including more countries and reflecting its significant strategic role.