Greeks have developed through the ages a passionate relationship with the sea promoting “nautical art” both for commercial and military reasons. For a country like Greece having thousands of kilometers of coasts and almost 6,000 islands, islets or simple rocks in its territorial waters, sea plays a vital role for country’s survival, security and growth. The country has long naval history, having today one of the largest shipping industries in the world.

In the recent history, Greece became an independent state from the Ottoman Empire in 1832 and until the 1950’s it was in constant wars. In the “Balkan Wars” in 1912 – 1913 it expanded its borders impressively while in 1922 the “Minor Asia Catastrophe” happened signaling the persecution of Greeks from western coasts of Asia. Greece entered the WWII joining the Alliance against the Nazis and the end of the war found the country almost destroyed and in a horrible civil war. The state joined the “Western Camp” and started to develop its economy, infrastructure and a proper public administration. After the end of the civil war in 1949 Greece enjoyed a long period of peace which allowed it to achieve economic growth, stability, social care and prosperity for its citizens.

Greece has a highly geostrategic and geopolitical position on the map, being together with Cyprus the southeast frontier of the European Union and the gate between the western world, the Middle East and North Africa. It also has central role in maritime strategic communications in Mediterranean Sea connecting Gibraltar straights, Black Sea (through Bosporus straights) and Suez Canal not only for trade and economic reasons but also for military tasks. Being a NATO member since 1952 and member of the EU since 1981 Greece is a factor of stability in the wider region of Southeastern Europe. In the last years Greece has developed a strategic relation with Israel and promotes the tripartite cooperation with Cyprus and Israel emphasizing in energy sector. Not only that but Greece also accelerates another tripartite relation with Cyprus and Egypt making clear that its strategic interests reach East Mediterranean Sea. 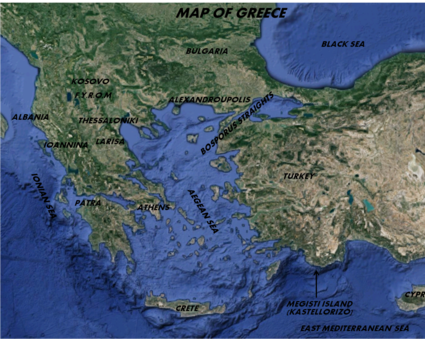 In 1974 it was last time that the country engaged in an armed conflict due to the Turkish invasion in Cyprus. The occupation of almost 36% of the island by the Turkish forces provoked in Greece the end of a seven year military dictatorship bringing democracy back to its birthplace.

Lately, Greece has been in the center of a financial crisis fighting to “stand at its feet” and to return back to economic normality. At the same time, the war in Syria made Greece the main gate towards Europe for large flows of refugees, posing another humanitarian and security challenge for the country in an already difficult and challenging international and regional environment.