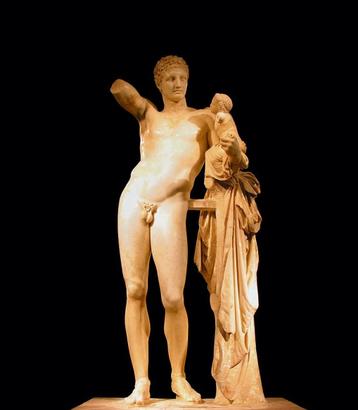 A few words about Hermes

Hermes was one of the twelve gods of Olympus. Son of Zeus and Maia he is known as the messenger of gods and the link between them and human beings.

He was conveyor of dead people’s souls (“Psychopompos”) in the dark world of Hades and only souls accompanied by Hermes were able to return back to the light. As the messenger of Olympus gods, Hermes was considered as the god of peaceful coexistence and friendly approach between people. He was also the god of trade and his figure could be found in the entrance of “Agora” in all big Greek ancient cities (“Polis”).

Moreover, Hermes was the interpreter of gods’ will and for this reason he was famous for his fluent and clear word. Consequently he was also the god of speech and eloquence. He was considered as the inventor of language, expression of human thought and divine word. People called him “Logios” (scholar) as the protector of persuasion, eloquence and letters.

His symbol was “Kerykeion”; a winged stick with snakes wrapped around it. The stick was miraculous and became a symbol of peace, abundance and wealth.


“HERMES” Institute of International Affairs, Security & Geoeconomy (“HERMES” I.I.A.S.GE) was founded in Katerini, Greece in 2017 and is an independent,  non – governmental, non – profit organization, consisting of scholars dedicated to the research and analysis of international affairs in regional and global level. The Institute aims at providing objective, scientific, and reliable research analysis through a variety of studies contributing effectively and constructively in the public dialogue and the evolution of scientific knowledge.

To achieve its goals “HERMES” I.I.A.S.GE focuses on a variety of research clusters such as:

a.         International Affairs: Is about the world we live all together. It analyzes the actions taken by all the agents of political activity; citizens, governments, states, group of states, non-state actors and international institutions affecting the peace, stability and, prosperity on regional and global level. Moreover it examines the interaction between sovereign states and the challenges they face in order to achieve their national goals. International affairs include a variety of topics such as international theory, international organizations, human rights, power, wealth, political systems, etc. Through the research and analysis of international affairs “HERMES” I.I.A.S.GE aims at describing, explaining and understanding the international affairs and the dynamic evolution of the facts.

b.         Security: “HERMES” I.I.A.S.GE aims at researching and analyzing the defense and security matters focusing on states armament, regional and global threats, military balance and power, nuclear and Mass Destruction Weapons (MDW), arms control, Security Sector Reform (SSR), and collective security. Living in a world of international anarchy rivalries and conflicts are proliferating putting international order and security into danger. Defense and security is a cluster which is an integral part of the research and analysis of international affairs.

c.         Geoeconomy: The term is used broadly and in variety of circumstances at times as a supplement or replacement of geopolitics. The proliferation of non-state actors is challenging the predominance of the Westphalian territorial state as an agent of economic activity and dictates the enlargement of the group of actors pertinent on implementing economic policies and influencing international economics. In this respect in “HERMES” I.I.A.S.GE we approach geoeconomy according to the definition of the Council of Foreign Relations (CFR) as “the use of economic instruments to promote and defend national interests, and to produce beneficial geopolitical results; and the effects of other nations’ economic actions on a country’s geopolitical goals.

d.         Promotion of democratic values, peace and cooperation of people and states.

a.         Promotion of cooperation with other research institutes and scientific foundations.

b.         Production of reliable, objective, timely, and accurate papers through the use of a combination of open source intelligence and official data.

c.         Promotion of the scientific dialogue through seminars, workshops and conferences.